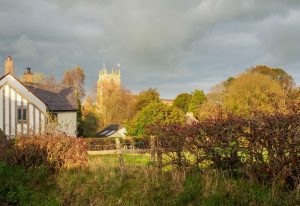 The village of Bunbury lies at the western edge of the Cheshire Plain some 3 miles from Tarporley and 12 miles south east of the city of Chester.

Little is known of its history prior to the Norman Conquest but it is generally accepted that the name is of Saxon origin and it is thought that there was a Christian place of worship on the site of the present parish church long before 1066. Early references to the settlement call it Bunan byrig, the stronghold of Buna.

The village is referred to in the Domesday Book (c 1086) as “Boleberie” and the lord of the Manor was Robert Fitzhugh one of Hugh, Earl of Chester’s, barons. He was also Lord of the Manor of several neighbouring villages including Beeston, Burwardsley and Spurstow. It was also recorded in Domesday that there was a priest, something of a rarity in this part of Cheshire at the time.

Bunbury itself was split into four parts; Higher Bunbury which contains the church and is the oldest part of the village. Lower Bunbury, the area now containing the shops and the more recent developments, Bunbury Heath, the area at the end of School Lane and alongside the A49 and Bunbury Commons, the area of land lying between Higher Bunbury and the Canal. 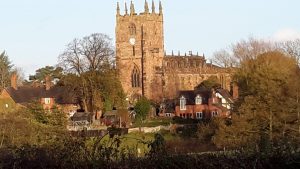 The crowning glory of the village is St. Boniface Church.

The current building dates back to around 1370 and replaced an earlier Norman church which in turn probably replaced an even earlier Saxon one.

Built at the instigation of Sir Hugh Calveley after he returned to the area after many successful years as a soldier of fortune in Europe, the Church of St. Boniface was originally a collegiate church and a number of priests were appointed to celebrate the Mass daily for the benefit of St. Hugh’s soul. His huge tomb lies in the middle of the chancel until this day. 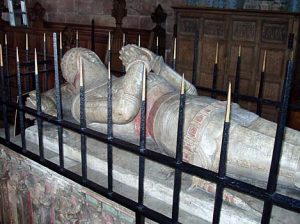 Amongst other memorials in the church, one of the most notable is that of Sir George Beeston, another military man who was reputed to have commanded a ship against the Spanish Armada and have lived to over 100 years old.

Another prominent feature of the village is its school, originally started as a Grammar School in 1594 in a building on land on the other side of the river Gowy behind the Chantry House in Wyche Road. It was built at the instigation of Thomas Aldersey, a London merchant and member of the Haberdashers Company who originated from Ridley.

The school moved to its present site on School Lane in 1874.

The old building was subsequently demolished. After changes to the whole state education system in the 1950s the school became the Bunbury Aldersey Church of England Primary School. We are justly proud of the Primary School which was given an ‘Outstanding’ report following the 2011 Ofsted Inspection. 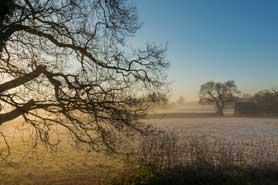 Today Bunbury comprises of just over 500 households with a population of approximately 1,500 people. Although there have been changes over the years with some loss of shops and some housing development, mainly infilling, the community spirit is still very strong.

The village is within easy reach by car to the historic city of Chester and the market town of Nantwich, and for commuters the M56 is only half an hour’s drive away as is Crewe railway station. In fact until the 1960’s there was a station at Beeston on the A49. Bus links are available to both Chester and Nantwich.

St Boniface Church is a very living, thriving church and details of services and all their other activities can be found on their website. There is also a small Methodist Chapel in the centre of the village.

Bunbury mill is nestled in a beautiful spot on the edge of Bunbury village. The grounds include the historic mill, a visitor centre, car park, cafe, an idyllic picnic area, the mill pond and wildlife pond. Whatever the weather there is plenty to do and see at the mill and local enthusiasts will conduct you on a guided hands-on tour of the 1840s mill, still working and producing fine flour.

For shopping facilities there is the Co-operative General Store and next to that Burrows the butchers. If you are feeling thirsty or hungry there is plenty of choice with 3 Pubs, a Cafe and the a Fish and Chip shop. Then perhaps  time for some exercise at the Playing Fields. There is a Tennis Club, a Scout Hut, Bowling Green and a children’s playground, not forgetting the Cricket Club to be found down School Lane opposite the school. Or, if you would like a walk further afield down one of the many public rights of way you can visit Sadlers Wells Wood, Bunbury Watermill or take a stroll along to the canal at Bunbury Locks.

There are of course, many clubs and societies with on-going activities, so something for every day of the week whatever one’s interest.

Many thanks to Trish and Bob Welch for contributing to this page.